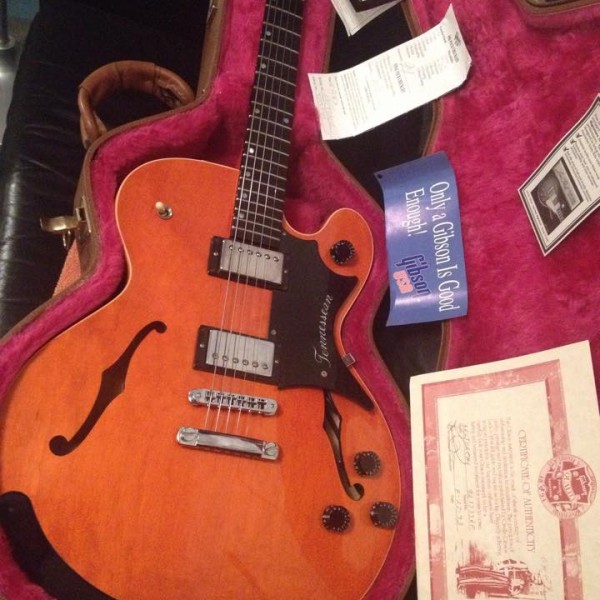 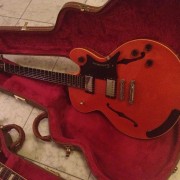 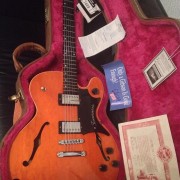 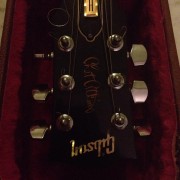 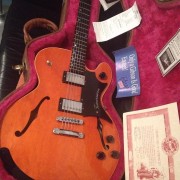 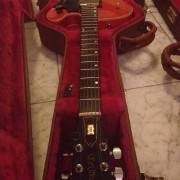 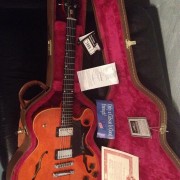 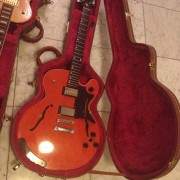 The Gibson Chet Atkins Tennessean comes from the Gretsch mid-50’s era guitars. The stars of those years were the 6120 Chet Atkins with twin DeArmond pickups and the White Falcon. The former has since become legendary as a guitar originally designed for country, but used by such rockers as Eddie Cochran, Pete Townsend (on the “Won’t Get Fooled Again” cut) and Brian Setzer (who now uses a custom made model). A later version of this one was occasionally played by George Harrison, but he was more associated with the Country Gentleman. That guitar branched out into the 6120, 6121, Country Gentleman, and the 6119 Tennessean. I won’t go into the specifics of the various types, but a brief description of the 6119 would be relevant. In 1958, it was changed to a thinner guitar, with F-holes, a Bigsby, one pickup and orange finish (like the 6120). This model continued to evolve, but again, I’ll keep it short since I’m really reviewing the Gibson.

However, I do recommend the Gretsch Pages website, from which I took some of the technical specs in order to make the picture of the original Tennessean correct. In modern times, Gretsch users confusethe types of models released, particularly during the years approaching the pre-Fender era. Go to that site to get the full history of the early 6120.

Over time, Chet did leave Gretsch in disgust over it’s deteriorating quality and went over to Gibson. His most innovative work was in creating the solid-holeless acoustic using piezos to eliminate feedback.

However, Gibson did create the Tennessean model and it’s interesting to note the differences. The most obvious is that the guitar has 490 series humbuckers instead of DeArmonds. That alone might turn off a Gretsch purist, but add to that a laminated maple body, and it seems to verge into heresy. The original was a sort of semi-solid (Gretsch wouldn’t put in a full ES-335 style middle block like Chet wanted, but the there was a small one and extensive machine routing).

This guitar does have the full wood block, but no zero fret (a feature he ALWAYS pushed for), and in theory is closer to the conception of what a Chet Atkins was supposed to be. Also, it has a very cool retro shaped pickguard, and oddly enough, a banjo style armrest.

The guitar knob configuration is a little different. Not that having two volume, master tone and volume knobs are odd, but one is located up near the cutaway, and the other three in the standard location. Takes some getting used to, but it does make sense after spending a little time with it.

Chet never considered himself a “country” guitarist, but one who played it all. This model and design, which I found to be somewhat similar to an ES-335 in sound, would have fit the bill better than many modern Gretsches. It also a nice elegance to the design, clean yet elegant.

There is one major flaw in this guitar. One thing that gave Chet his distinctive warm, yet bell-like clean tone was the single coil DeArmonds. It would have been closer to the original concept to have used P-94’s, a very clean and creamy single coil pickup based on the P-90.

One key reason is that Chet generally fingerpicked his music, and the 490’s often start booming or get really muddy in the bass register when the guitar is fingerpicked. It’s really a better flatpicking guitar, with a superb ES-like jazzy/rock tone.

Which is fine, but it’s not Chet. For someone like me, who has quit using even fingerpicks (just the fingers now), the guitar can be a muddy sounding disaster when I start three finger playing. I tried a thumbpick and fingers combination but then I got a severe volume and tone imbalance.

It improved a bit when I dropped the bass section of the pickup a bit and raised the treble on the amp. Most of the difficulties were in clean tone anyway. If you’re going warmer in sound, it’s not so much of a problem.

The laminated maple body isn’t bad, nor the lack of a temelo bar. My old Gentleman didn’t have one either (but then, I bought it used). In fact, the harder maple does offset the heavier 490 humbucker sound a bit and sharpen the tone. Although at this price range, why Gibson couldn’t include a solid spruce top (the usual companion to a maple body) is
mysterious.

Like any good Atkins, it has a fast neck. In fact, compared to some guitars, it’s downright skinny. The purpose would be to be to chord quickly (a must for a jazzy fingerpicker), but rockers and jazzers will find it a fine for any style. Just avoid dropping the guitar on it’s pretty neck.

On the whole, it’s a fine guitar. In fact, I liked it better than the ES-335 in some ways, as it has a more defined midrange. Also the banjo style armrest is actually a very good idea, corny as it may seem to purists. There is a lot less after-playing buffing and removal of sweat off the guitar finish thanks to that little detail.

Guitar is in very good condition with minor play- and bucklewear.